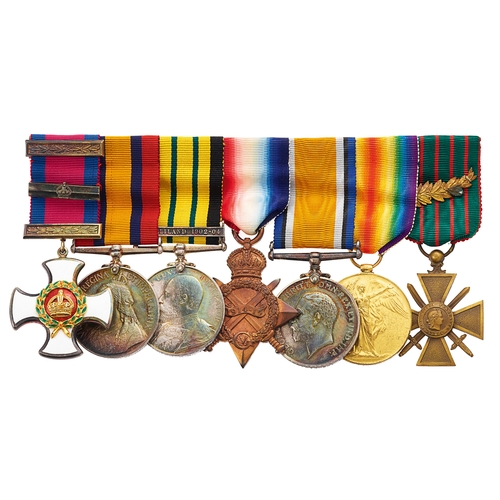 DSO LG 1st January 1917 :In recognition of bravery and devotion to duty during minesweeping operations.Bar to the DSO LG 24th March 1919. “For minesweeping operations 1st July to 31st December 1918.French Croix de Guerre LG 17th May 1918.Commander Leslie Drew Fisher, D.S.O., R.N.  was born at Reigate; entered the Royal Navy, as Midshipman in 1893; advanced to the rank of Lieutenant, 29 March 1900; with this rank he served onboard HMS Sappho an Apollo-class cruiser during the Boer War and during operations in Somaliland onboard HMS Merlin a Cadmus-class sloop at this time being used as a survey ship. He was promoted and appointed to the command of H.M.S. Electraa Destroyer as part of the Home Fleet and before his retirement from the Royal Navy in 1910 was given command of the Destroyer H.M.S. Spiteful . At the outbreak of the Great War he was reengaged as Lieutenant for Special Service, Firth of Forth with H.M.S. Columbine, for minesweeping duties. He was given command of H.M.S. Lilac  for minesweeping operations in the North Sea, during his command Lilac struck a mine and appreciation was expressed for his conduct on this occasion, for valuable services rendered in connection with salvage of the vessel. After a short leave he was promoted to the Acting rank of Commander 3.9.1915 and returned to Columbine and rendered good service on the occasion of the discovery of a hostile minefield in the approaches to the Firth of Forth April 1916. He was invested with his D.S.O. at Buckingham Palace on the 14th November 1917; he added a Bar to his D.S.O. for services in minesweeping 1.7.1918 to 31.12.1918 By the end of the Great War he had been Mentioned in Despatches 4 times. He resigned his commission and at the outbreak of the Second World War once again now 59 volunteered and was ; reengaged for service at H.M.S. Claverhouse (Reserve Training Base), Edinburgh. He died in 1953. 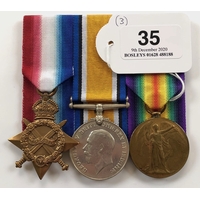 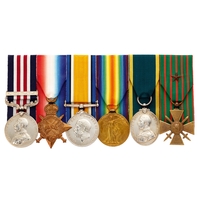