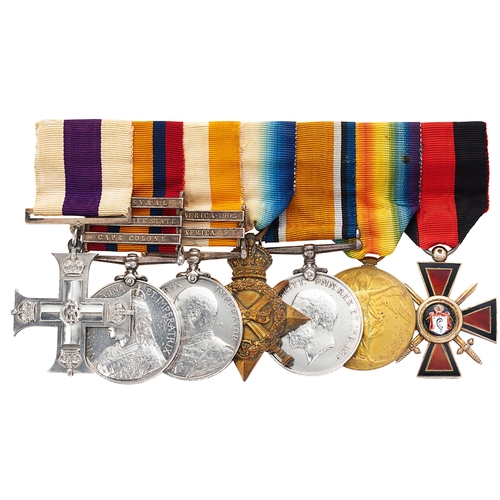 Military Cross London Gazette 16th September 1918.“For conspicuous gallantry and devotion to duty. This officer, though not ordered to take part in a counter-attack, seeing men on the left hesitate to start, led them to the attack under heavy rifle and machine-gun fire, and gained his objective. His fine example of gallantry inspired the men and caused the success obtained.”Major Alan Mure Bellingham MC was born in India in 1880, returning to the family’s native home Bellingham Ireland, he was employed as a War Correspondent for The Daily Sketch and at the age of 20 volunteered at Belfast for service in the ranks of the 46th Company (Belfast) 13th Battalion Imperial Yeomanry. He was captured and held prisoner in May 1900, but was released. After his one year service in the ranks he was granted a Commission with the Belfast Company in April 1901. Attached to the 13th Company (Shropshire) he was wounded in action at Kleinfontein on the 24th October 190. Recovering he remained in South Africa until the end of the war. Returning to Ireland he was granted a Commission into the Middlesex Regiment which he held until 1907 when he resigned. In 1914 he rejoined the Middlesex Regiment and appears to have been attached to the Royal Irish Rifles landing in France on the 15th November 1915. He volunteered for service with the Machine Gun Corps and promoted to acting Major in January 1917. With the end of the war he volunteered for service in North Russia with the Royal Irish Rifles, later Royal Ulster Rifles. The award of the Imperial Russian Order of St. Vladimir 4th Class is confirmed in “White Russian Awards to British & Commonwealth Servicemen during the Allied Intervention in Russia 1918-20”. Returning from Russia, in 1922 he is noted as serving as Adjutant with the Madras Guards. 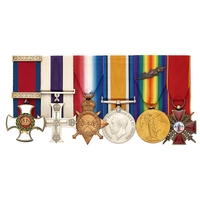 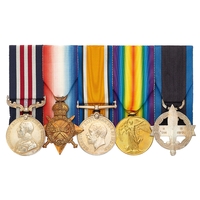